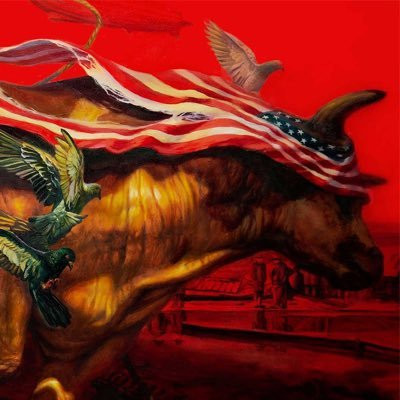 Protest The Hero – Palimpsest: Getting punched in the stomach will never feel better.

Protest The Hero is one of those bands I've always struggled with. Something about them didn't sit well for me. I really tried to get into them, but I never managed to do so. Not even their critically acclaimed Volition did it for me.

On paper they were the perfect band for me. I heard people comparing them to The Mars Volta, a band that has been of paramount importance in shaping my musical taste. In reality I couldn't stand listening to Protest The Hero for longer than five minutes.

And then this monster released. The artwork for this album is absolutely amazing. Now let's see what it sounds like.

The first thirty seconds of ‘The Migrant Mother’ were ok'ish. But then those vocals came in: "Yikes! It's more of the same, this isn't going to work.". But I persisted. Those first few songs were chaotic and intense. It's hard to describe why I felt they were so intense, because normally I don't really have any problem with that. No song too chaotic for me. But these guys just kept going and going and going. Fast riffs, hectic drumming, yelling vocals, what was this all about?

‘From The Sky’ has these instrumental passages that really caught my ear. I had to admit this was some high level musicianship. The tempo changes felt weird, but cool at the same time. I totally get why people recommended me this based on my love for The Mars Volta. It has that same over-dramatic and weird feeling. You're never really sure what emotion to feel, but it's full of emotion at the same time. It's a very abstract feeling that's hard to describe.

‘All Hands’ is a more approachable song. Is this band winning me over? Definitely not on first listen, but admittedly it does sound very groovy at times. The growls in this song add some extra punch. It's not helping my ADHD, though.

Some moments on this album provide some room to breathe, but it's not much. Listening to this album, you'll basically have to hold your breath for the full 52 minutes. Just dive in head first and go for it, just like I did.

After my deep dive into Palimpsest, I wanted to go again. And again. I don't know what changed. Probably not them, but me. All of the tracks on Palimpsest grew on me. All of them. I got more addicted to this album after each listen.

Tracks like ‘The Fireside’ or ‘Soliloquy’ are absolute bangers. They never let go. Most lyrics on this album are very on the nose. It's all very clear what the themes are. Especially looking at the current zeitgeist. That and the very obvious cover art. Honestly I wouldn't want it any other way, it's exactly that boldness that won me over. It doesn't hold back and punches you in the stomach. Yay, sounds great? Give this one some time and getting punched in the stomach will never feel better!

In conclusion: I hate Protest The Hero...I also think a solid 9 for this album is completely justified.
© 2022 Progresque. All rights reserved