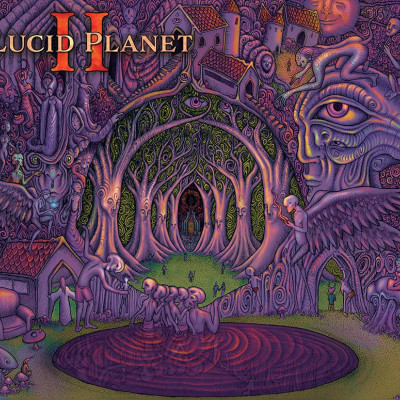 Lucid Planet – II: A psychedelic trip around a world full of creativity, fun and passion.

"Lucid Planet" doesn't exactly sound like we're about to take a walk in the park, to be honest. The name of the band and their artwork suggest to me they have indulged in a few Pasta al Funghi's before, if you know what I mean. Not that that would matter, everyone chooses how to spend their time. But having said that, I do expect this to be creative and crazy.

Let's get started. ‘Anamnesis’ opens up like a Shpongle song. Many psychedelic sound effects are layering and building up a tension. Interesting. Right before the one minute mark we are offered a first glimpse into the trip we're taking. It does remind me of a faster ‘Reflection’ by Tool with all the atmospheric sounds going on in the background. So far, this band is true to its name. A rhythm forms behind a female chanting voice. The intro stops and a male voice takes over. This piece emits a very feverish vibe so far. Then we go on to the more progressive metal elements. Damn, this melody gives me goosebumps. It's beautiful. This does not sound like Tool. This is something else. Starting from three minutes in, they make clear we should be paying attention here. I have a funny feeling about this one already. There come the Shpongle-esque electronic percussions again. This sounds fresh, the vocals are unique and dreamy. I'm now halfway the track and there is just too much to write about. It is extremely lush and filled with creativity. Now they create this incredible open space to get comfortable in, before the vocals come back into frame. The vocals emit this enchanting and mesmerising vibe that reminds me of ‘Set The Controls For The Heart Of The Sun’ by Pink Floyd. What an opener. Wow.

Next up is ‘Entrancement’. I have a feeling we're going to get more trance inducing psychedelia. An Asian-sounding flute welcomes us. Hi there! The tabla's come in. Oh, suddenly we get kicked in the face by these tribal chants. Electronic sounds weave in and out of the track. A dark and deep voice sings to us. I can vouch for the title, it is indeed entrancement. The female voice brings a spark of light into this dark tribal track. The song is composed mainly by repetition, but there is a beautiful melody to be found. What am I hearing right now? It certainly has a unique style to it.

‘Organic Hard Drive’ opens with bright tones, almost sounding toy-like. Very playful and innocent. It evokes the same feeling as the intro of ’Simple Boy’ by Karnivool does. The subtle birds in the background remind us that this is still a walk in the normal realm of nature. We're preparing for take-off, but we still have plenty of time to do so. Heavy drums hit us together with this didgeridoo-like electronic synth sounding thing. Hell, I don't know what that is, but it sounds deep. Just when I thought thàt was heavy, the guitar starts chugging this filthy riff. And vocals! They remind me of ‘21st century schizoid man’. The song branches out in an atmospheric but funky beast. Jungle sounds are everywhere. Was that a frog? The vocals are soothing and beautiful, the toy from the beginning is back. So comfortingly beautiful. Something is brewing however...The electronic influence reveals itself once more, this time more aggressive and in your face. You can't get around it this time. The track bursts into literal trance music. Are we taking off now? What is happening? A high pitched guitar riff dances with the dark trance music. I'm at loss for words here, this is so out of the box. Do I like it? I won't say it yet, but deep down I know already.

A soundscape transitions into the shortest song of the album: ‘Offer’. I hear a sitar sounding guitar. A very light and floaty sound here. Even when the vocals come in, the song keeps that floaty feel. I think the previous track indeed was our launch into the above and beyond. And now we're here. Floating. Wait. What? Am I now listening to a track that successfully made the bridge between Reggae and Metal? This sounds so effortless and plain fucking awesome. Before I know it, the track is over and we're listening to a new one already.

‘On the Way’ features a more prominent role for the female voice, beautiful. This record is gonna be way too short, even though it clocks in at 1 hour and 8 minutes. It is now that I begin to think to actually stop writing this stupid review and start enjoying this piece of music. You only get to enjoy it for the first time once and this is my time.

While listening to the open space that is the latter half of ‘On the Way’, I fell in love with this album. There's something so beautiful here. There's so much going on and still it is so spacey. It is dark, but also amazingly bright. What is this sorcery?

‘Digital Ritual’ is insanely psychedelic. The voice is catchy as in a pop-song, but it's surrounded by a psychedelic vibe. The styles they manage bring together are amazing. Ah, there are the little birds again! What a total joy this record is. It emits this "Let's have fun! Let's make music!"-attitude. I do sometimes miss a bit of the more organic instruments. I do think they mess around with electronics too much.

‘Face the Sun’ might be the answer to that. Starting off with a tribal war drum of sorts, I like the vibe already. Chants erupt, I hear a beautiful guitar and some sort of chimes. It definitely sounds inspired by Asian music. The dreamy vocals complement the instrumentation perfectly. A groovy riff forms. Hey, if King Gizzard & The Lizard Wizard wrote this track, it would be among their best work, just saying. You just ease in and out of every vibe they put you through. Nothing is abrupt, even when this harder riff comes in. And wow! Halfway the track it opens up so beautifully. This is indeed the track I was longing for, back to the more progressive metal. They make it sound so effortless and natural.

For someone that thinks ‘Reflection’ is Tool's absolute best, I love this. I'm also sad I have to bring Tool into this, but I think it is fairly obvious that band had some impact on Lucid Planet. But they really carved out their own, unique style. Right when I bring up Tool, the song switches to this Kashmir-like riff. They prove that their influences are broad and that we should stop comparing this to anything else.

As ‘Zenith’ begins playing I know this is going to be special. Beautifully atmospheric. A fragile guitar plays over a spacious soundscape. As the soft vocals introduce us to the pummeling riff, I get goosebumbs. Yes, this is epic. The two voices come together now and create this beautiful balance. After how amazing this album has been already, I'm amazed that they are pushing it even further now. Halfway in I think it is highlight of the album. Tribal and dark. It almost feels like the beginning of something new. Then I realise it is. You can feel the energy from this band. There is fun here. There is passion. These guys are just getting started.

As I go into the last two minutes of this album, I'm still so focused on the music. They kept my attention until the very end. I love Tool with all my heart, but we have evolved now. Time to pass the torch. Lucid Planet is here.
© 2022 Progresque. All rights reserved