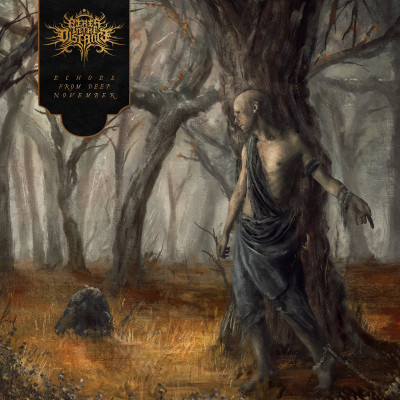 Fires in the Distance – Echoes From Deep November: It's one sound and it's a god damn good sound.

In march of 2020, when dusk was upon us, I felt untouchable. Back then, I saw the changes in the world as an opportunity to get creative and create time for what was important to me. Later that same year, everything got darker. The last three months of 2020 I felt like I lost my sense of direction. I started wondering why I was doing what I was doing. I guess isolation had finally settled in. The lack of perspective left a hole. More than once I found myself walking home through empty, dark city streets, hastily, to get inside before the curfew. Often, my only companion was this album. It worked wonders.

Fires in the Distance deliver their debut album Echoes From Deep November with such determination that after a first listen you know they're a force to reckon with. Most of the time I can't find the patience or mood to delve deep into the world of death-doom. But there have been anomalies where I almost spontaneously get grabbed by such a sound. It happened with the hidden gem that is ‘Paradise Belongs To You’ by Saturnus a long time ago. And it happened again with this one.

Echoes from Deep November isn't the most adventurous album ever created, but this band is fully aware of that. Instead of a loose album full of experiments, they put forth an incredibly cohesive album that brings a few very strong unique elements with it. It's one sound and it's a god damn good sound. This is an amazingly mature debut.

It's a dark album. But similar to the Saturnus album mentioned previously, there's also light entering through the cracks. As such this album is the perfect friend to accompany you in your catharsis. Of course, that's a completely personal journey. All I can say is: for me it cut to the bone.

I'm not going to describe stylistically how this album sounds. This review is meant to be an appetizer for you, but also a way for me to vent about my personal experience with this beautiful beast.

If you like doomy, melodic death metal (Swallow the Sun, Saturnus, Kalmah), this is a must for you. If you don't, but you find yourself, sometime at the end of November, lost in empty streets or perhaps in life, this one's also for you.
© 2022 Progresque. All rights reserved