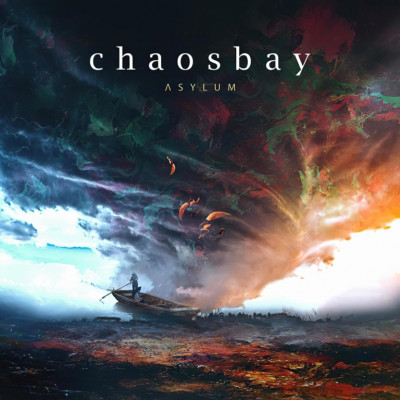 Never had I heard of Chaosbay, until their release of Asylum. Now, months after hearing said album, Chaosbay has cemented itself as one of those bands I keep suggesting to friends.

At the forefront of Chaosbay, is Jan Listing, a guitarist from Berlin, Germany. It seems Jan couldn't stay silent while watching the European migration disaster that's been going on for a few years now. And rightfully so, that's one of the biggest humanitarian crises of our time. If you don't understand that sentiment, let me tell you, Chaosbay does an excellent job with Asylum to make it clear. "If there is a god, how could this happen?"

In the first moments of Asylum, I thought I was being greeted by a fairly average sound. But the more you sink your teeth into it, the more you will recognise every twist and turn. One time you think your ribs will puncture your longs because of the heavy-hitting riffs and vocals, the next you're floating along with the soft melodies. Melodic passages and hard-hitting moments go hand in hand.

Lyrics recur long after being introduced to you, making it feel like we're coming full circle. It plays like a concept album. The sheer musicianship and amazing songwriting will leave you in awe. And if you're human, the themes of this album will do exactly the same.

‘Amen’ comes second on the album and is also the track to pull you in. This track delicately plants these themes in your head and you won't let them go until the very end of the album (or even after). The track is also the immediate proof of how dynamic this band is. That average sound I thought I heard in the very beginning, was completely dissolved by the end of this track.

All tracks on here are memorable. Be prepared to sing along after a few listens. The melodies are captivating. There's some pop elements, but they're not used ad nauseam. You'll always have that fat djent riff or beautifully written guitar solo to fall back to. Or the outstanding vocals. My god, the vocals! There's a nice balance to all of it. Everything flows extremely well.

With ‘Soldiers’ we have a clear ballad on our hands. While I suspect out of context of the album this track could come off as a bit whiny, in relation to the other tracks this works very well. I would even argue this was a very needed track, to compensate for the denser, more epic songs. Speaking of which, right after comes ‘Criminals & Sons’, a heavy hitter. Harsh vocals, filthy big riffs and then we go into the more melodic passages. Song structure wise this album has been super ambitious and in all honesty, it really overshot that mark.

Once you get to the last track, ‘Heavenly Island’, you should be more than impressed by this band. If you're not, allow me to suggest you to listen just once more. For me, that "once more" became many times and I would now even consider this record an essential in my progressive metal catalogue. I would love for these guys to get some more exposure, because to me they really are a young prodigy to progressive metal. Mark my words, these guys are going places.
© 2022 Progresque. All rights reserved