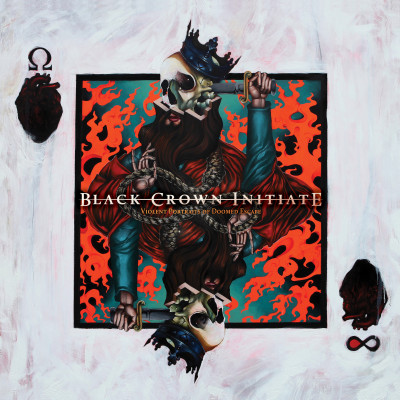 Many progressive death metal fans were sold immediately when in 2013 Black Crown Initiate released their debut EP Song Of The Crippled Bull. They have stayed on our radar through releasing two full-length albums after said debut. However, some argue they never reached the heights of their first EP.

For some time, the future of the band was doubtful. With two band members leaving and vocalist James Dorton being diagnosed with cancer, it seems they've had a rough ride. However, they managed to pull through with two new members, a cured vocalist and a new album. Violent Portraits of Doomed Escape released on the 7th of august 2020.

Opener ‘Invitation’ starts softly. In the first verse, the word "cancer" is very prominent. I'm pretty sure this album will be very emotionally driven. Once the growls come in, you get that same feeling the title has. A feeling of wanting to get away, escaping, but not managing to do so. James' growls are clearer than ever, they are even decipherable. Andy Thomas' clean vocals contrasting stark against the harsh vocals. The clean vocals give the track a very digestible touch. At around six minutes we get some room to breathe, much like we get from the intermezzos on Opeth's Blackwater Park or Still Life.

‘Son of War’ doesn't give you any time to reflect. The growls are aggressive, the riff is catchy. The clean vocals in the chorus work surprisingly well with the lightning fast drum parts. Melody-wise I was reminded of some of Mastodon's later work.

‘Trauma Bonds’ is a continuation of the first two songs in typical BCI style. It balances beautifully between technical death and in the latter part progressive death.

'Years in Frigid Light' is proof that both the harsh and clean vocals work so well together. Despite the instrumentation being super tight, the real highlight of the album are the vocals. The song fades out into some sort of throat singing on ‘Bellow’. This is a two minute long interlude. I get the need for an interlude on albums as dense as this one, but please, could you pick something that's not annoying?

‘Death Comes in Reverse’ has a softer approach than any other song so far. Very symphonic inspired. Did I say the vocals on this album are amazing? They dynamically play off each other. The track never reaches the same catharsis as the other tracks did, making me feel a bit uneasy.

‘Sun of War’ and ‘Holy Silence’ are the outro of the album. Both feature very aggressive growling mixed with amazing clean vocals. At the end of ‘Holy Silence’ they let the instruments breathe again. Often I focused on the vocals because they are just so good, but there's a whole lot of praise to be given to the instrumentation on this album as well. Without the platform given by the instrumentals, there was no way for the vocals to shine as much as they did.

Black Crown Initiate has outdone themselves with this album. Violent Portraits of Doomed Escape is dark and straight up aggressive. Make no mistake, it's also musically profound. They pushed forth an album that is both ambitious and urgent. We got to see Black Crown Initiate break the walls surrounding them. For anyone who's in doubt on this band, listen to this piece. If you don't get it, listen to it again.
© 2022 Progresque. All rights reserved