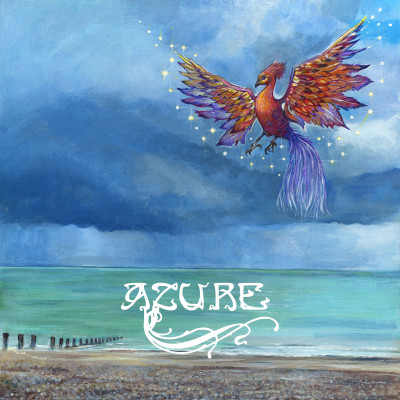 Azure – Of Brine And Angel's Beaks: Fresh prog that captures the essence of the genre in the most fun way imaginable

Azure describes themself as a fantasy prog band. Before listening to their sophomore album Of Brine And Angel's Beaks, I really didn't have any clue of what that would be all about. Probably something with dragons. Now, after ten days of non-stop listening to this record, I think I finally get the gist of it. Yet I feel there's still more to uncover.

The best albums are those that you don't immediately "get". Sometimes you even dislike them a little bit before falling completely in love. I had it when I first heard The Mars Volta and it happened to me again with Thank You Scientist. This is no exception to that weird rule (is it only me?).

However, what grabbed my attention straight away with this album, was the amazing instrumentation. ‘Self-Crucifixation’ is filled with all the good elements of prog. Dream Theater levels of quality. Add to that the amazing vocal performance and you have the perfect album opener. Some frills in the vocal performance signal that this band is here to have fun. And fun is never far away on this record. Even on the slower ‘Ameotoko I - The Curse’ you feel the passion in both the vocal performance and the instrumentation: there's always that glimmer of light that makes the music breathe.

The more epic passages are what makes this fantasy prog, I guess. That, and the overall theme. But in all honesty, I'd be happy to call this Disney prog. I don't say that with disdain, at all. Listening to their music, I don't think Azure would take it that way either. Azure is the type of band that has more than enough self-relativism to take a little punch. It's exactly that self-relativism that also enables them to make the music they want. I have the feeling they don't give a fuck about what people think, this is the music they want to make. As proggy as it gets, they also never sound pretentious. Or technical for the sake of it. Everything feels natural and effortless.

Somebody once told me to let prog die. He told me all these new prog bands were just rehashed King Crimsons and ELP's that didn't bring anything new to the table. Yet here I am, listening to this piece of work that doesn't sound anything like 70's prog, but is still the essence of the genre. ‘Lustre: Siphon Of Umbra’ is such a groovy track that incorporates Power Metal influences, not really something I associate with King Crimson nor ELP. Yet, through the synth work the influences of the old gods are still there.

Speaking of Gods (Damn seamless transition), ‘Outrun God’ is a heavy hitter: Azure plays around with vocal filters, some heavy metal riffs and a ton of risky choices. Every track is something fresh. Every element works in cohesion with another. Above all, the emotion is carried by the vocal performance. One that will not be everyone's cup of tea, but it's just undeniably a very strong performance. If you don't like it, at least admit it's of very high quality.

As much fun as this album really is, on seventh track ‘Mercy’ everything gets a little bit darker. Heavy riffs and theatrical vocals dance in unison. Just like the rest of the album, the melody just takes you somewhere. That's something I really want to highlight about this album, whenever there's a buildup, you'll go somewhere. Never does it linger or meander into no-mans land. There's always an epic reward at the end of the journey. Something that's really commendable for an album of over an hour. Never do I feel they wasted a moment. Yes, it's really one hour of top notch songwriting!

Near the end of the album, they demonstrate they still have some tricks up their sleeve with ‘The Jellyfish’. A quirky pop prog song that will stay with you long after you first heard it. Just don't tell anyone I'm dancing in most ridiculous fashion to this while doing the dishes...Whatever, tell everyone! Who cares?

‘Ameotoko II - Cloudburst’ is the epic finale of an epic album by an epic band.

I'm stunned by this offering. This could end up very high on my personal AOTY 2021 list. If you like your prog of the very proggy kind and you don't shy away from theatrical vocals and storytelling, this record might be your next addiction. Also, don't forget to have this album ready when another douchebag tells you to let prog die.
© 2022 Progresque. All rights reserved